This is seriously the best and most meaningful birthday gift I have ever given. And mpix is THE BEST place to get it from.

I love giving meaningful gifts. It certainly is not possible to do for every holiday for every person in your life. But every once in a while, it is nice to go all out and shock the heck out of someone that you love. I had one of those “once in a whiles” just last month, when I gave my absolute favorite birthday gift I have ever given in my life to my absolute favorite person on the planet: my one and only sister.

The Best Birthday Gift Ever

The Gift: a book.

The title: 40 Women Who Love Kendi

The contents: 40 lists of 40 things that 40 women love about Kendi, with a picture of each woman next to her list.

That’s the short version. Keep reading if you want to know the ooey gooey details…

Step 1: Contact the Husband (unless you are the husband)

I qualified this heading with “unless you are the husband” because my brother-in-law wants to share this idea with all of the men that he knows because it’s such a great idea for a husband to do for his wife. So don’t be afraid to share this post with some men out there!

The first step was to contact my sister’s husband with my idea: I wanted to get exactly 40 women to send me a list 40 things they loved about Kendi (that’s my sister), along with a picture of either just themselves or if they had a picture with Kendi, I encouraged that. Then an additional (optional) part of this plan was to have anyone who felt inclined to send a gift for Kendi that would be meaningful, and if possible, tie it into the 40 theme (like 40 of her favorite candy, or a $40 gift card to their favorite lunch place, etc).

The book would be titled, “40 Women Who Love Kendi.”

Can you guess how old she turned last month? You guessed it! 40! I sent her husband a list of people that I thought should be included, but I obviously needed some help adding to the list. The last time we lived in the same state was when I was a student at USU, which was 15 years ago. So I have not necessarily had a front row seat to the many friendships she has had over the years.

Less than 3 hours later, I had a spreadsheet in my inbox from my awesome brother-in-law with a list of 43 women (I told him I wanted a few backups in case I couldn’t get ahold of the first 40 on the list). His spreadsheet had the following columns (and I added a few as the project progressed, to help me track everything further):

Of course, not every box was filled in this spreadsheet. But most people on the list had at least the husband’s phone number, which was a great start.

I got to work making contact with the women on the list. I sent emails, texts, made a few phone calls, etc. I had an explanation typed up on my phone so that when I got ahold of someone and got their email address, I was able to copy and paste the explanation of what I was asking for.

Step 4: Keep it All Organized

This was quite a bit of information to keep organized, so I created a folder in my email account named “Kendi’s Book,” specifically for the emails I received for this project. Once the lists and pictures started rolling in, I made another folder, named “Kendi’s Entries.” That way I already had the emails that came in with conversations about the project separated from the emails that actually had the entries in them. This made it so much easier when I went to make the book!

Step 5: Make the Book with Mpix!

When I had all of the entries and pictures in my inbox, I went to work creating the book. I settled on using mpix for the actual book. I CANNOT SAY ENOUGH GOOD THINGS ABOUT mpix! This was my first time using them, but will certainly not be the last! But I’ll get to that in a minute.

This is where those email folders came in handy. I had a vision for what I wanted the book to look like, so I used Canva.com for the text portion for each spread. That way I was able to make the text look exactly how I wanted with the colors, fonts, and sizes. I copied and pasted the text from each email into a new page in Canva, edited it, and then saved it as a jpeg.

***Tip: Have a box of Kleenex handy for this part. Editing these lists was a very lengthy process that I wouldn’t have traded for anything. To read 40 things that 40 different women love about one of the most special people in your life is such a privilege. I finally had to go take out my contacts and wash off my makeup because I was a sobbing mess during this part.***

Once I had all of the text pages edited and saved as jpegs, I uploaded them (along with all of the pictures these 40 women had submitted to me) to mpix. This part was easy, because everything was ready to go.

I wanted a random order for the pages, so I made sure no two family members were next to each other, and I spread out friends from different timeframes in Kendi’s life.

With some simple click and drag motions, the book came together quite nicely!

Step 6: Pick Your Options on Mpix

This is exactly what I ordered:

Here is my honest opinion of the options I chose.

The premium panoramic book is amazing. The lay-flat pages are a must for this type of book! They really do lay flat and allow you to spend as much time on each page as you’d like, without the page involuntarily turning, and without having to crane your neck to one side to see the entire page.

The semi-gloss photographic paper is the most amazing paper I have ever seen in my life. I could not believe it when I opened this book for the first time. The quality is stunning. The pages feel as thick as cardboard and are as clear and crisp as the best photos I’ve ever gotten. The finish on this particular paper is absolutely perfect. Not too glossy, but not a dull matte either. It’s almost as if every page is coated with some magical wax-type substance that was either burned or frozen into the grains of the paper, to make it feel indestructible. I’m sure it isn’t indestructible, but that’s how amazing it feels as you turn the pages.

I struggled with the cover. I couldn’t decide which cover to get. In the end I went with the linen cover. While the linen cover is definitely classy and great quality, I kind of wish I had gone with the photo cover. I think I was worried that it would look cheap to have a photo on the front. I have ordered a couple quick books from Shutterfly, and the covers I had gotten on those books were not the look I was going for. However, after seeing the incredible quality of mpix , I wish I would have gone with the photo cover, even if I had just gone with the Title Page of the book. I think it would be neat to see the title on the front of the book. Having said that, the linen cover is very nice.

The dust jacket is pretty lame and I would not recommend it. It isn’t attached at all, so it slides down and comes off the book very easily. It doesn’t feel like it belongs on the book, and I feel like it cheapens the feel of the book. I had a feeling I would feel that way about it, but wanted to order it to see if I felt differently in person about it. My mind didn’t change – dust jackets are just annoying and lame, in my opinion. 🙂

I cannot imagine a bigger disappointment than putting this many hours into a project as special as this, and then being disappointed in the end product. I was nervous going with a company I had never used before, but I had heard great things about mpix, so decided to go for it. I am SO GLAD I DID!!!!!!!!!!!!!!

Since I had made the gifts an optional part of this project, I had a bunch of random stuff from different people. I decided to try to make them all look uniform and matchy, since I was the only one wrapping them all. I went with the gold and black theme and it turned out perfect!

I put any gifts that would fit in those little Hip Hip Hooray bags (purchased from the Target Dollar Spot) in those, and then wrapped anything that was bigger than those in the black with gold polka dot wrapping paper (Michaels little Dollar Deals). The tablecloth, hanging things, banner, and centerpiece were from Party City. And I happened to have those cute little black chinese food boxes from the Target Dollar Spot so I filled those with her favorite candies. The scrolls were different gifts from friends. One of them was a compilation of 40 quotes, another was a certificate for a lunch and 40 laughs with some friends, and another was a certificate for lunch when we were in the city to see Hamilton the next day. The gifts that came in were seriously amazing. Some were funny inside jokes, while others were just plain thoughtful. Every single one of them was perfect!

And of course, the book was front and center on the table as she walked in.

This was the PERFECT NIGHT. I think it is one that I will re-live in my head for years to come. And I bet my sister will, too. ♥

If you love this idea as much as I do, be sure to pin it for later!

Receive EXCLUSIVE SUBSCRIBER ONLY FREE PRINTABLES, including "This or That Emergency Preparedness" 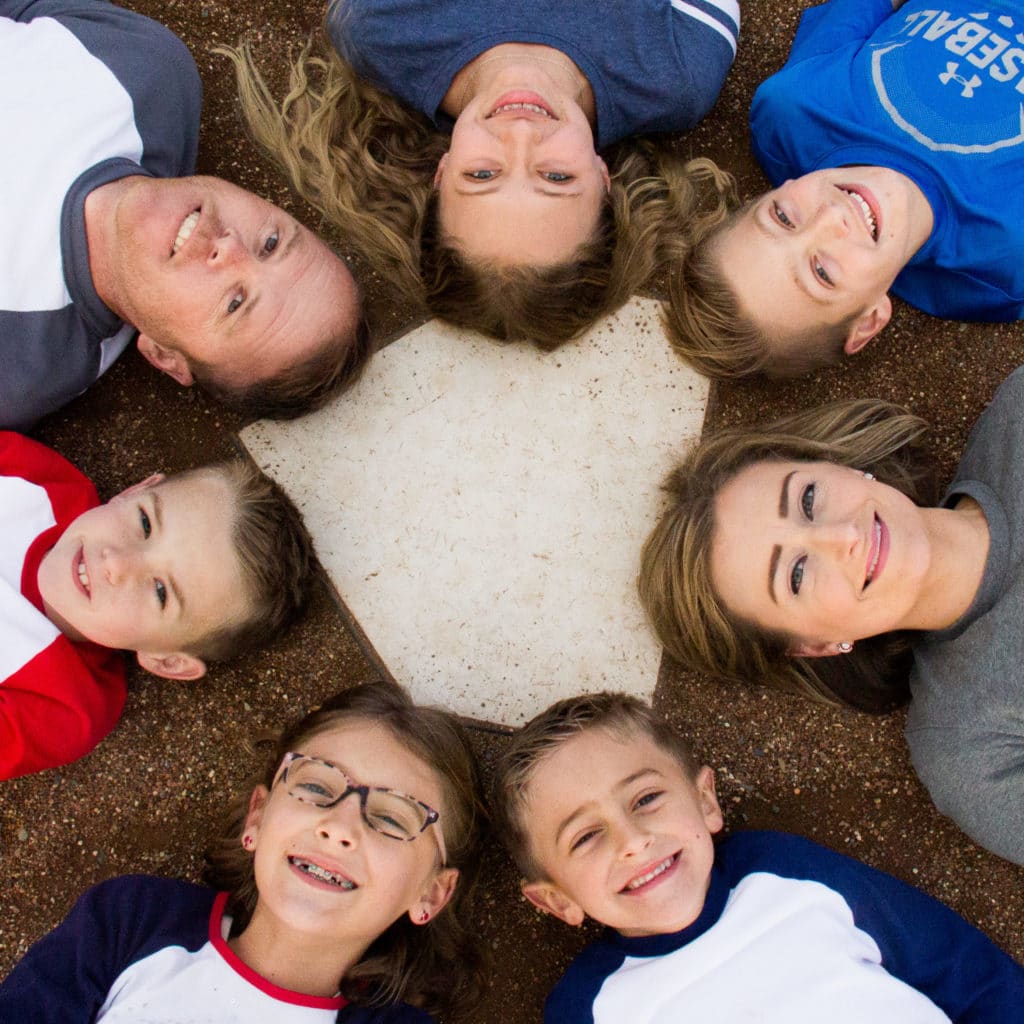